Australia v Georgia was a highly-anticipated match as typhoon Hagibis neared Japan. Since Hagibis was predicted to be the worst storm to hit the island nation in decades, all eyes were on the only match of the weekend. Of course, the Georgians weren’t about to let the Wallabies get through without a fight. By full-time, the final score was a respectable 27-8 for Australia.

Georgia had managed a grand total of 201 tackles throughout the match, which definitely frustrated the Aussies. Still, they couldn’t stop the Wallabies from scoring three tries in the first half. Even if they missed two conversions, they still managed one through Matt To’omua. To’omua also managed to score a penalty in the second half. In addition, both sides subbed out a number of players. 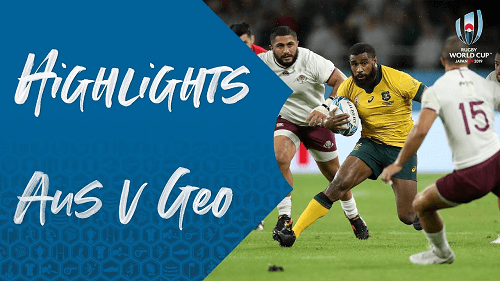 Many critics claimed that the Aussies gave an “unconvincing performance” during the match. They subbed out players, missed conversions, and really struggled to get across the field. Moreover, Isi Naisarani got a yellow card for another high hit. This is Australia’s third yellow card for the same offence in the tournament.

Meanwhile, Georgia has now played 12 matches against “tier 1” teams and failed to win. On the plus side, they have proven a lot to other teams who expected to sail through the matches against the Georgians. Sadly, they will be heading home, along with Canada and the USA. These three teams just couldn’t get onto the scoreboard and we’ll be sad to see them go home. Watch the highlights of the match below.

In their upcoming fixture against England, Australia are considered underdogs with odds set at 3.75. On the flip side, England are favourites with odds to win of 1.37. An unlikely draw has odds of 27.00.