Cameron Clyne has decided to step down from Rugby Australia as chairman after Michael Cheika was forced out. Reportedly, the chairman chose not to stand for re-election as he faces public criticism for allowing Australia’s rugby sides to fall short. Most notably, this year’s World Cup campaign has been blamed on various people, including Cameron Clyne. Aussie rugby fans are furious with the Wallabies’ performance and they are out for blood.

While the chairman believes that he “achieved” a lot for RA, he admitted that the decision to remove the Western Force was regrettable. In addition, the Wallabies’ “modest results” had “blighted” his track record. Moreover, Israel Folau’s continued scandals are not helping, nor is his wrongful termination court case. In effect, Clyne is choosing to fall on his sword and leave the fallout to his successor. 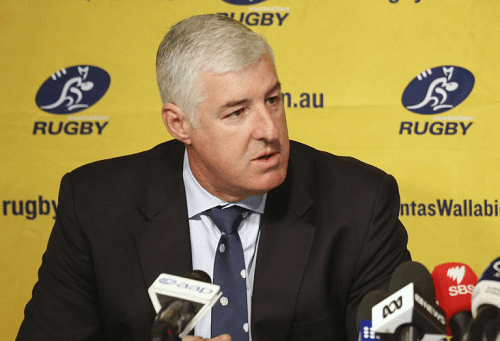 What Happen Under Cameron Clyne?

If critics are to be believed, Clyne is one of many chairmen responsible for the fall of rugby in OZ. Under his management, we lost a World Cup, lived through Israel Folau’s homophobia, and somehow managed to fall in every form of rugby. Moreover, we’ve lost yet another coach. So, despite Cameron Clyne’s resignation, the noble sport of rugby is in trouble.

While it’s not solely Clyne’s fault, he has become the figurehead where blame lands. In a statement, he expressed hopes that his resignation would direct focus to “positive” work across the sport. He also took credit for the rising popularity in women’s and sevens rugby. The fact that the women’s sevens team won gold at the Rio Olympics is another claimed victory for Cameron Clyne.

Moving on for Rugby Australia

According to Cameron Clyne, his last four months in office will be focused on a new broadcast deal and dealing with Folau’s legal action. Moreover, he’ll be trying to appoint a new coach for the Wallabies. In addition, he hoped for a “smooth transition” to new leadership in March. The former banker’s positive spin is yet to pay off.

So, while Rugby Australia tries to right the wrongs of 2019 and previous years, we’ll be keeping AU bettors updated. Keep visiting BestAUBettingSites.com for the latest rugby news!