England v New Zealand left many All Blacks’ fans devastated as the world #1 was knocked off of their pedestal. For nearly twelve years, England has struggled to make it past the Rugby World Cup semi-finals. Now, they’ve managed to beat the bookies’ favourite to get to the finals for the fourth time. To rub salt into the wound, they beat New Zealand 19-7.

According to the experts, New Zealand was looking short of ideas after England managed to score the first try. What followed was what many would call a surprise attack for the overconfident All Blacks. Their first try came at the 57-minute mark, with a conversion. But they were already trailing with 16-7. While England missed four penalties, it was tough to watch the Kiwis fumble. 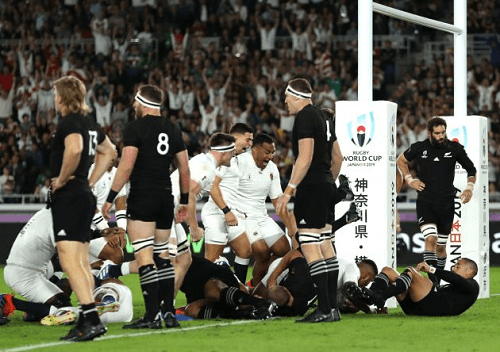 This was the first match since 2011 for New Zealand to stay in the single digits. In 2011, they still managed to beat France, but they couldn’t do it again during England v New Zealand. Just under a year ago, the tables were turned in NZ’s favour. However, the English side were just too hungry for a win. After all, they’ve managed to lose every other tournament over the past two decades.

Eight penalties would make any team pause and redirect, but not this time. New Zealand’s strategy seemed to take a knock and they remained off-kilter for the rest of the match. Since a lot of their gameplay needs a lot of momentum, the relentless pauses broke their stride. So, we wind up with an English win and an uncertain final.

Odds on the Finals

Now that the favourite will be playing for bronze, England is expected to take the cup. Of course, this doesn’t guarantee anything, even if South Africa fumble everything. Both top teams have a history of performance issues. So, it can still go either way. We strongly suggest hedging all bets and taking the odds on both top teams.