Red Bull fans were ecstatic at the Brazilian Grand Prix 2019 when Max Verstappen took first place. After a long and difficult season, the Flying Dutchman managed to clinch the win. While Hamilton managed third place, he received a five-second penalty, promoting Carlos Sainz to third.  In a new twist, Pierre Gasly got second place, his first appearance on the podium since starting in Formula 1. This was after he was dropped from Red Bull’s first team to Toro Rosso, their second.

It was undoubtedly Verstappen’s race as he continued a strong streak over the weekend. For a change, the first few laps were calm, while the final five really upped the drama. Both Ferraris crashed into each other, and had to retire from the race. The Italian team had a double retirement in one of the tightest races of the season. Unfortunately, Verstappen’s teammate, Alex Albon, got pushed out by Hamilton after the safety car left the track. Hamilton earned a five-second penalty (and two license points) for the move after stewards reviewed it. And so, Carlo Sainz got his first podium. 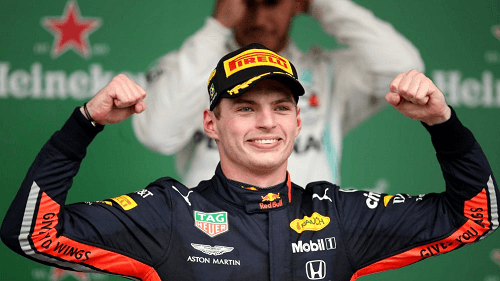 Throughout the Brazilian Grand Prix 2019, Max Verstappen made his win look straightforward. Without a doubt, he managed to drive strong and keep the pressure for first place. With his eighth career win down the barrel, he never lost focus. He started the race in pole and remained at the front as other drivers fought behind him.

However, he narrowly missed a pit lane accident on his first stop when Robert Kubica’s team mistimed his exit. Kubica earned a five-second penalty, as did Daniel Ricciardo 20 laps earlier when he hit Kevin Magnusson. For a few moments, Hamilton held the lead again, until Verstappen breezed past him. Moreover, Hamilton snapped at his team when his battery unexpectedly died.

His technical issues seemed to keep going when Verstappen pulled away again at a fast rate. Once again, Hamilton was enraged and questioned if his engine was having problems. As well as the soft tyres his team had suggested. The other top four were boasting medium tyres, as Gasly held onto P7. Valterri Bottas started having engine troubles, resulting in another safety car on the grid.

So, with the final Grand Prix of the season on the way, it’s all about the points. Hopefully, the 2020 season will be more exciting. However, we doubt it. So, keep visiting our website for the latest motorsports betting news.