France v USA was a pretty standard match for the unequal sides on 2 October. France claimed a bonus point to round out their final score of 31-9 over the Americans. While the USA put up a good defence, they just couldn’t keep up with the other team. Unfortunately, France’s winning side just couldn’t let the ball go.

Yoann Huget opened the match with a try just five minutes in which was followed by fly-half Camille Lopez’s winning kick. Lopez also created France’s second try by sticking a high ball into the corner. Wing Alivereti Raka caught and scored thanks to Lopez, but the French team’s discipline allowed the USA to win and convert two penalties. At half-time, these penalties were the only points for the USA. 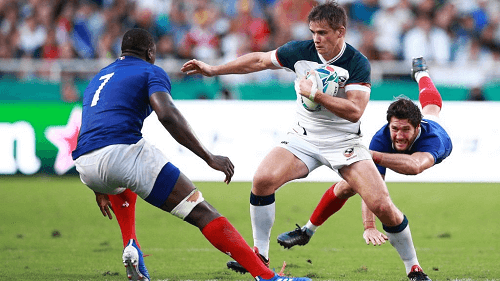 Following the half-time break, France was back with a winning pattern and fierce attacks. While AJ McGinty managed the USA’s third penalty conversion, the Americans just couldn’t score a try. Fans in Fukuoka must have been anticipating another shock result for the Rugby World Cup. Gael Fickou of France marked his 50th test by dashing those hopes and forcing a third French try.

Then, Lopez set up teammate Baptiste Serin for a fourth try with another high kick collected by Raka. While Poirot made it a five with a “driving maul” on the final whistle. Despite poor handling and discipline, France made it through with their bonus point. Sadly, for the USA, they will likely be knocked out of the World Cup after earning no points again. France got the job done and bookies will be raising their odds for upcoming matches.

According to Betway.com, France’s next match against Tonga has high odds for the French team.