While facing a fine of £50 000 (AUD89 774), Huddersfield Town FC has revealed that the club was pressured by Paddy Power with legal threats. The fine, imposed by the Football Association of the United Kingdom, is part of a crackdown on gambling advertising. Reportedly, the two-tier football club claims that they had no choice but to display the giant logo across players’ chests.

Per Football Association rules, sponsor logos can only take up a 250 square centimetre area of the jersey. However, the debuted kit had the logo stretched diagonally across the front of the shirt in July’s friendly fixture against Rochdale. The pre-season match kits were unveiled two days prior as part of the sponsorship agreement. Of course, part of the issue was the ongoing public outcry against gambling operator advertising.

Almost every club in the British Isles advertises at least one sport gambling operator. The prevalence of these deals is believed to encourage sports fans to start betting more. In addition, the believed larger presence on social media through the kits. 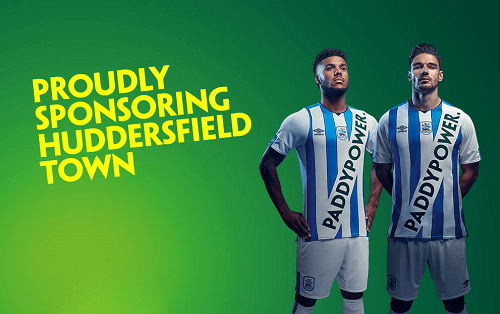 “Save Our Shirt” Campaign Blamed

An investigation into Paddy Power’s involvement has not begun, but the operator’s campaign says otherwise. Reportedly, the giant logo is part of a campaign to show off prohibited design to create awareness. Paddy Power has never been shy about creating controversy, but their sponsorship is still fishy to experts.

At the tribunal hearing held in August, Huddersfield Town admitted the charge against them. According to tribunal documents, the club tried to end the deal early but were threatened by Paddy Power. As such Huddersfield has been warned about future conduct by the FA. The fine will stand for the club.

Still, the deal remains for the 2019/2020 season, though the branding will no longer be featured. It’s unclear whether or not the FA will get involved again. Due to regular cases of football players gambling, anti-gambling campaigners have called for stricter measures.

Keep visiting our website for updates on this story and other gambling scandals!