Japan v Scotland ended with respectable score of 28-21, cementing Japan’s place in the quarter-finals for the first time. While Sunday’s matches hung in the balance due to a typhoon, it was rewarding to see Japan get to the top of the pool against Scotland. Seeing the Scots get a thrashing after threatening officials over the fixture was just the icing on the cake.

Despite safety warnings over typhoon Hagibis, Scotland was adamant that their match against Japan had to happen without fail. At the time, they believed that they would beat the Braze Blossoms to make it to the final eight. However, this was not the case for them after they were soundly beaten and handed their ticket home. It just goes to show that overconfidence hardly makes it to the end. 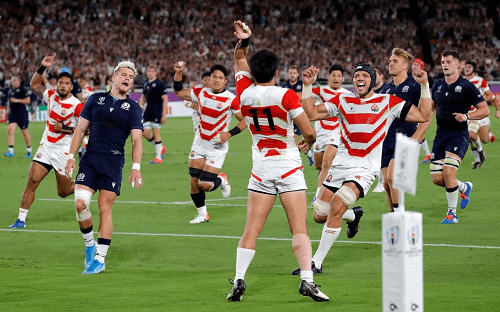 As the Brave Blossoms and Japanese fans wept tears of joy, Scotland skulked off the field at full-time. In all honesty, we could see the game was over by half-time for Scotland. After all, Japan v Scotland started with a supercharged first half, and they wouldn’t have recovered. Statistically, they also couldn’t keep up as Japan sprinted through four tries and as many conversions. Scotland earned just two of each throughout the game.

As the game wore on, it became obvious that Japan was hungry for a win, and nothing would get in their way. In fact, they were dancing circles around the Scots for most of the second half. One of the highlights of the match was when the Blossoms realised that they’d won. Some other highlights can be viewed in the video below.

Now that they’ve proven that they have what it takes, the odds for Japan have taken an upturn. Multiple sportsbooks have given them a better margin, and the market is much more friendly towards a win, at least for the quarter-finals.