Despite high hopes for the first two weeks, the pool standings for the Rugby World Cup in Japan are dire. Australia has suffered a shock defeat, a player ban, and it just seems to be getting worse. Even officials are struggling to uphold regulations, and the overall viewership is dropping worldwide. So, how much more can Aussie fans take during this tournament? Well, hopefully enough to win, but the bookies are sceptical.

Moreover, many opinionated reporters are painting the tournament as the “flattest World Cup in history”. With so many hurdles and scandals, we can’t agree, but you can’t stop journalists. Instead of whining, we’re going to look at the facts. Firstly, that many unexpected teams are playing above standard, while fan favourites struggle to overcome their shock. This is the opposite of boring to our experts. 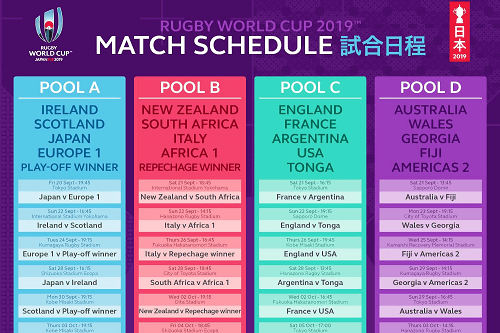 Shock wins are rolling fast. Wales beat Australia and most predictions weren’t expecting it (in OZ anyway). Uruguay beat Fiji, and Samoa managed a good first game win. Unsurprisingly, the All Blacks took over the field, but South Africa managed to rank above them in the pools. Even Italy has shocked the odds by beating Namibia and Canada, thereby earning first place in Pool B.

Of course, Japan’s upturn in recent tournaments has also placed them at the top of Pool A by beating Ireland and Russia. Soon, they’ll be going up against Samoa to prove their worth. This weekend’s fixtures will be worth watching if the surprises keep rolling. In case you were wondering, England are currently at the top of Pool C. While Wales is sitting above Australia in Pool D. All hopes for both teams to go through to the semi-finals rest on their performances in the coming weeks.