New Zealand v Canada was a masterclass in the All Blacks’ best strategies. While Canada attempted a few tries, the final score of 63-0 proved that they weren’t ready. Unfortunately, Pool B is pretty stacked with good teams and Canada can’t keep up.

Rugby fans in Japan were thrilled by the game, where the All Blacks managed to score almost every five minutes. New Zealand also honoured the memory of former All Black Stanley “Tiny” Hill, who passed on Tuesday.

While handling errors allowed Canada to get the ball during the second half, they just couldn’t break the All Blacks’ dogged defence to score a try. A fumble by Richie Mo’unga allowed Gordon McRorie to get close to New Zealand’s 22. He found the ball and moved to Peter Nelson. Then, Nelson took on Beauden Barrett, but was hauled down short of the line. 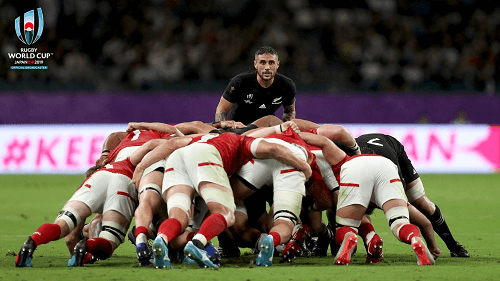 While Canada scrambled and tackled, their narrow defence was exposed. However, they still threw themselves into challenges with determination. The added challenge for the All Blacks tested their skills. Sporadic attacks turned to turnovers for the Kiwis, adding excitement for fans as the humidity set in. All in all, Canada really tried, but the mismatched game was a sure thing for New Zealand.

Unfortunately, the Canadians are only going up against top teams during World Cups, and they can’t seem to keep up. In 2015, they went up against Italy, Ireland, and Scotland but failed to make it far.

Meanwhile, the latest success for the All Blacks has stacked odds in their favour to go all the way. Still, their next matches against Namibia and Italy could dull the sharp edge of this winning side. Currently, New Zealand’s odds against Namibia stand at 1.00 to win. Namibia is sitting on 24.00 and an unlikely draw is set on 35.00.