Rugby powerhouse Saracens is in boiling water for breaching salary cap regulations. In what will probably be the biggest English rugby scandal ever, the club will face major penalties. According to reports, they face a 35-point deduction and fines totalling AU$9.9 million. For three seasons, the club seems to have flouted salary cap rules.

At least eight of the players on the English squad who lost to South Africa play for Saracens. So, this is probably not the news they wanted to hereafter losing by 20 points. At the moment, the club is facing the most severe penalties ever handed out in English club rugby history. Since they are one of the most successful clubs in the UK, the news is a shock to many fans. 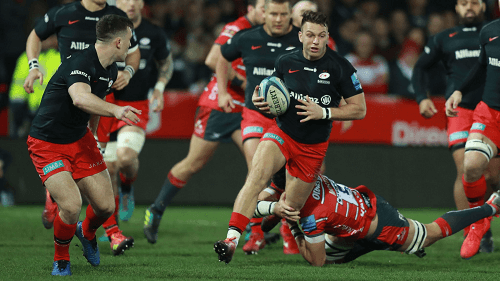 After a nine-month investigation by Premiership Rugby, findings reveal that several players were in property or investments with the club chairperson. This is damning evidence against the club as they failed to disclose payments to players for the three seasons. However, they can only be penalised with point deduction in the current season. Saracens is now at the bottom of the premiership table.

The current salary cap is AU$13 million per player, excluding two marquee players. This measure is meant to level the playing field for all clubs. While player salaries weren’t revealed, the fact that they exceed this limit is a clear violation. However, Saracens plans to review the decision through an arbitration body. Still, the review can only be carried out if there was an error of law, an irritational decision, or procedural “unfairness”.

As the decision is being reviewed, the sanctions against Saracens are currently suspended. Yet, there is talk that other clubs are demanding Saracens be stripped of their titles. Reportedly, the announcement was delayed to avoid “derailing” the World Cup campaign. In a statement, Saracens claimed that co-investments were not a salary cap breach. However, they admitted to the “administrative errors” in not declaring some transactions.

Whether or not they were actually breaching the rules will be reviewed. So, we’ll be keeping tabs on this story. Keep visiting BestAUBettingSites.com for more rugby news.