F1 stewards have seized a number of Ferrari parts after the team was accused of cheating. Allegedly, the Italian team used non-regulation engine parts before the US Grand Prix and swapped them out, following the FIA issuing a clarification on engine rules. If the claims are true, the team could be disqualified from the current season. Moreover, there’s the fact that the team is currently far behind on the leader board after last week’s crash.

Cheating is very serious in motorsports, and the allegations will have to be proven with sufficient evidence. Part of what motivated the inquiry is the fact that Red Bull wrote to the FIA to ask for clarification about power units.  In turn, the FIA issued a Technical Directive about fuel systems designed to give cars a power boost. Then, according to a German publication, Ferrari parts were taken after the Brazilian Grand Prix for testing in FIA labs. Two other engines’ parts have been confiscated, including one Ferrari engine from another team and a non-Ferrari engine. 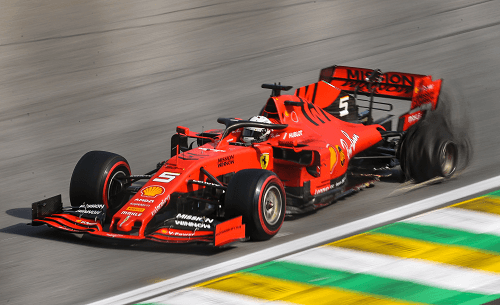 Following the US Grand Prix, Max Verstappen publicly accused Ferrari of cheating. This was after many fans noticed how much slower the red cars suddenly were on the straights. While Verstappen’s comments were called “immature” and “unprofessional” by Ferrari driver Sebastian Vettel, they did sow doubts. Further, Vettel claimed that the allegations of cheating were “too far” and “not right.”

In a now-famous crash, the two Ferrari drivers took themselves out of the Brazilian race by crashing into each other. With only Abu Dhabi left for the season, they could not race again if the investigation into the Ferrari parts proves they were cheating.

While nobody expects Formula 1 to be tame, there have been a few scandals this year. From Pierre Gasly’s demotion to Charles Leclerc’s surprise wins, it’s certainly been fun for fans. Then, of course, there’s also Daniel Ricciardo’s cheeky remarks before the Brazilian GP to Valterri Bottas during interviews. Bottas commented on surpassing Hamilton when Ricciardo quipped that he should “feed [Hamilton] steak” to put him off his game.

Trust the Aussie to make a joke like that after his own disappointing season. We’ll be waiting for the Abu Dhabi Grand Prix on 1 December. So, keep visiting us for more motorsports news!