George Russell Takes Another Win at the Azerbaijan Virtual GP

While he might not have a point in the F1 World Championship, George Russell has won his third title on the Azerbaijan Virtual GP circuit. Russell snuck into pole position during qualifying, narrowly bumping Alex Albon to second. As the race started, Russell and Albon got a clean getaway as the other drivers tried to squeeze through turn one.

Soon, it became a clearcut battle between the Williams and Red Bull drivers for the win. Both drivers tried different strategies, starting with their tyres. While Russell pitted on the eighth lap to swap his soft tyres for mediums, Albon took hard tyres for his stint.

Over team radio, Russell told his strategist that he was worried about the tyres falling off and leaving him a sitting duck. However, he managed to finish three seconds ahead of Albon. Finishing off the podium is Esteban Gutierrez racing with Mercedes. 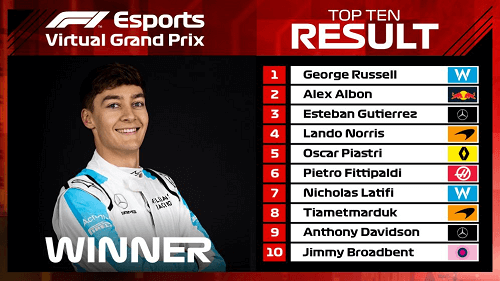 Down the track, Charles Leclerc struggled to get going and got into a significant collision with Pierre Gasly in his debut run. With three different time penalties and two pit stops quickly following, Leclerc finished 14th.

Also struggling was Sergio Perez, who ended his maiden race in 15th. Meanwhile, Gasly managed a 12th place finish, just behind Thibaut Courtois, YouTuber Jimmy Broadbent, and SkySports’ Anthony Davidson. Overall, this was an entertaining race to watch, so check out the highlights below:

The Azerbaijan Virtual GP marks the second-last online race for F1 as the FIA gets ready for the start of the season. Last week, F1 confirmed eight races, with Austria first up for a double-bill, followed by Hungary in the third weekend, and England for another double-bill. Here’s the full lineup:

According to the official website, details for a “wider calendar” will be released in the coming months. So, get ready for racing by visiting our website for more updates!