FunPlus Phoenix (FPX) is the second Chinese eSports team to win the Summoners Cup at League of Legends (LoL) Worlds 2019. For the second year in a row, the trophy will be going home to the League of Legends Pro League (LPL) in China. While their Fortnite Battle Royale and Player Unknown’s Battlegrounds sides are still climbing their leagues, the win marks a first for the team.

By winning the Cup, FPX have brought a lot of attention to the Chinese league, one of the biggest in LoL. Many fans believed that the finals were close before they began. However, G2 eSports (G2) seemed to be asleep for most of the match. Despite a fairly even match up in terms of mechanical and macro skills, G2 made some really terrible decisions. G2 lost 3-0, which is virtually unheard of in League of Legends Finals. 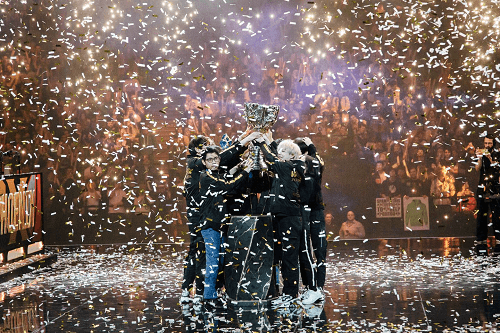 From the start, G2 made questionable decisions for their line-up. They kept picking champions with obvious weaknesses, which FPX immediately took advantage of in the first minute. This type of gameplay is just not what fans expect in the finals. After all, these are meant to be the best in the league, not an uneven match-up where one team is mopping the floor with the other.

G2 managed to secure an Infernal Drake, but FPX got the Baron. For a few minutes, it looked like G2 would take the game, but Wunder got caught again and allowed FPX to take the base. As well as their first game point.

Throughout game two, things seemed to slow down until G2 got another Infernal Drake. However, they lost three players to FPX in a pincer. Then, things took a dark turn when G2 lost the Rift Herald and got repeatedly outplayed. In a strange twist, they couldn’t take much in return while FPX took control of the game. G2 had minimal success and lost almost every objective while FPX ran down the map.

Their failed attempt at a comeback was quickly squashed and the team lost heart. After a few ill-advised fights, G2’s opponents took another point.

In their last match, not that they knew it, FPX took the first tower in record time. This was the fastest turret in the entire tournament. G2 continued to struggle with picking up their usual aggressiveness as they half-heartedly took two kills. While they woke up a bit 14 minutes in, they quickly fell behind again. Then, the nexus fell and FPX became the champions of the tournament.

Next Up for League of Legends

The end of the World Championships is usually marked by a new original track from Riot Games. as part of the opening ceremony, they debuted “GIANTS”, featuring a new fictional rap group of champions. Last year, they debuted KDA with “POP/STARS, Riot’s own K-pop outfit featuring Kai’Sa, Ahri, Akali, and Evelynn. This year, they introduced the world to True Damage, who focus more on rap.

New champion Senna is joined by Ekko, Akali, Yasuo, and Qiyana. The video for the official track was released at the same time as the opening ceremony and racked up 1 641 100 views in seven hours. The song is voiced by the likes of Becky G, Keke Palmer, SOYEON, DUCKWRTH, and Thutmose. These performers were joined on stage by augmented reality versions of the champions.