Israel Folau seems to be money-grabbing with updated claims of $14 million from Rugby Australia. He claims that he would have been the next Wallabies captain and lost out on team deals. Many critics and former fans of the player have taken to calling him “hypocritical” and greedy. According to reports, his chances of becoming captain were slim. This goes to show that he should have held his tongue in the first place.

In April, Folau posted some misinformed comments on Instagram condemning “sinners” such as homosexuals. Afterwards, Rugby Australia made the decision to terminate his contract. Recently, the former rugby player blamed abortion laws and marriage equality for the devastating bush fires in New South Wales. It would seem that he stands by his opinions, because he has left the controversial social media post up. 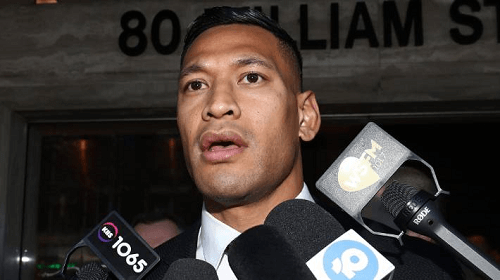 When court documents revealing Mr Folau’s compensation claims were publicised, he lost respect from fans and other parties. Without a doubt, Folau will be held accountable for his hate-filled opinions. After all, there are laws these days that prohibit hate speech, with or without religious backing. So, Folau might lose his case.

According to journalist Jim Tucker, Folau has a “loss of reality” and logic. Many posts mock his claims of a possible captaincy and Rugby World Cup win as his reasoning for a $14 million payout. Some posts also called him delusional. Through a poll from news.com.au, fans made their opinions clear on his supposed morals. They said it was right that he got sacked and that he should be funding his court case out of his own money. However, participants did agree the Australia is becoming too politically correct.

Despite the statements from Folau, Rugby Australia has decided to remain mum. While we don’t expect them to answer, it’s possible that their case is boosted by Folau’s continuous commentary on homosexuality and other social issues. Since he was caught on camera making his statements, there’s no doubt that he’s in the wrong.

Still, there’s no way of knowing if he’ll be denied his payout. So, keep visiting bestaubettingsites.com for more updates!