Nigel Owens, a respected rugby referee, has become a whistle-blower on stupidity. The Welsh referee, who officiated the England v New Zealand semi-final, is putting Twitter users on blast. Reportedly, Owens had a “strong word” with a Twitter user who was confused by his Citroen ad. Apparently, the user thought the ad, featuring a bear, was promoting animal cruelty.

In the ad, Owens can be seen teaching the bear “sophistication” by grooming it and overseeing the bear playing the cello. Then, he dresses it up in matching clothes, which is far from realistic and is obviously not a real bear. Still, it’s probably more feasible than a rugby match without a single penalty. However, not everyone found the humour in the ad and the Twitter user responded in a since-deleted tweet. Finishing off with a mention to animal welfare and conservation groups.

“Very concerned and sad to see @CitroenUK & @Nigelrefowens using a bear to advertise their cars. This is wrong on every level and promotes the use of animals to perform demeaning and unnatural tricks to entertain the public.” 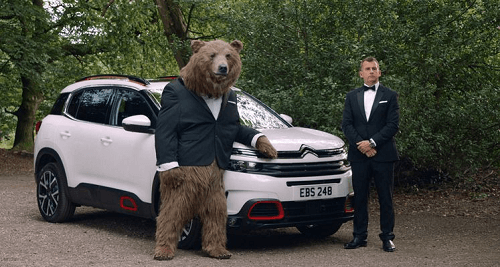 Most people would understand that costumes these days are pretty realistic. However, Nigel Owens decided to point it out to the concerned Twitter in a glorious tackle. He wrote: “Kate with all due respect, please use a bit of common sense. Its[sic] a man in a bears[sic] suit. I would never involve myself in anything like this if it was a real bear. You’ll be telling us not to support the wonderful children in need charity next because of Pudsey Bear.”

His response is a red card for anyone unfamiliar with Twitter. Since it was posted, the tweet has received over 9000 likes and 500 comments. To be fair, he could have been less sarcastic, but we’re still laughing at his tact. For those who don’t know, Pudsey Bear is the mascot of a UK Charity, Children in Need. He’s a well-known feature in their campaigns, and obviously not real.

Thanks to this little Twitter feud, Citroen is gaining a lot of publicity. Of course, that’s usually why ads are made, but this one is just the right amount of ridiculous. We applaud Nigel Owens for his fair but firm decision and we may pin this tweet up for the rest of the year. Long live the rugby referee of Twitter and the Internet.

Keep visiting BestAUBettingSites.com for more stories like this and the latest news!