Home » Typhoon Hagibis about to Rain on the Rugby World Cup

Typhoon Hagibis about to Rain on the Rugby World Cup

Typhoon Hagibis will make landfall in Japan on Saturday, officially raining on the Rugby World Cup’s parade. According to experts, Typhoon Hagibis is a “super typhoon”, which increases safety risks for everyone in Japan. Estimates from satellites are grim, and the storm is moving quickly towards Japan’s east coast. While it is expected to weaken on the approach, the winds and rain will be severe.

As a result, World Rugby has cancelled fixtures for Saturday as a safety precaution. Matches scheduled for Sunday will be announced later on, but officials are positive that they will be played as normal. Australia v Georgia will go ahead as scheduled on Friday, and Ireland v Samoa will be played early on Saturday. However, New Zealand v Italy and England v France have been cancelled officially. The four teams will be awarded two points per World Rugby rules. 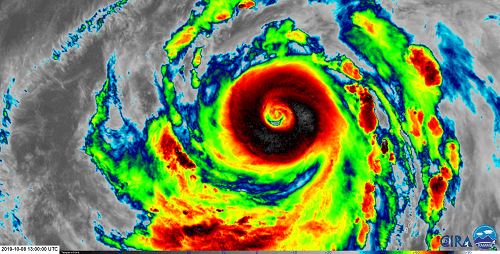 Based on advice from the Japanese government, fans and citizens have been encouraged to stay indoors. Moreover, people have been advised not to travel and to stay updated through social media and official websites. Reportedly, World Rugby will be “monitoring the situation extremely closely”. In conjunction with weather experts, they are hoping to predict the outcomes of the storm on the pool fixtures this weekend.

Expected damage to local infrastructure is quite grim, but Japan has a positive outlook. Japan Rail has announced that their services could be suspended on Saturday. A number of airlines have also confirmed that flights to Japan will also be suspended for Friday and Saturday.

When this year’s tournament began, another storm hit Japan just as the opening ceremony started. Typhoon Faxai affected residents in the Chiba prefecture, and some homes are still without power. Many homes were also damaged in the Chiba prefecture. Hopefully, the storm will not cause too much damage and those in Japan will be able to ride it out.

Keep visiting BestAUBettingSites.com for updates on this story and other rugby news!