During the pandemic, Formula 1 is still going with digital races on the popular F1 2019 game. This Sunday’s Spanish Virtual GP is the latest instalment in the series, showcasing F1 drivers against other professional sports stars and gamers in the mix. Overall winner George Russell managed to get the win and keep Charles Leclerc busy for most of the race.

While commentator Anthony Davidson managed to crack the top ten for the first time, Lando Norris dropped out and took last place. Meanwhile, YouTube star Jimmy Broadbent managed a respectable 11th place. This hard-fought race was fun to watch for anyone missing traditional sports. So, what happened? 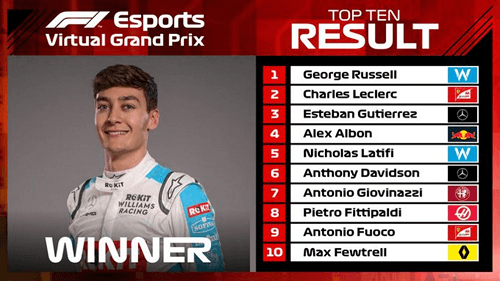 After qualifying in pole position, George Russell duked it out with Ferrari’s Charles Leclerc, landing in the fifth position at a stage as Leclerc overtook him. By lap 20, George Russell clocked in the fastest lap of the race and closed in rapidly.

Since the Virtual Grand Prix is running on the original race schedule, fans will have to wait until 24 May for the Virtual Monaco GP. Then, it’s another two weeks until the Virtual Azerbaijan GP. In the meantime, YouTuber Jimmy Broadbent plays F1 2019 almost daily as he practices for the races.

There are a few other motorsports and esports matches to follow as well. So, keep visiting our site for updates!