Rugby betting results are in from this weekend’s matches. Upcoming fixtures are sure to thrill fans as the pool matches wrap up for the quarter-finals. However, there are still a few surprises in store for rugby fans. Our team of experts will also weigh in on the latest points standings, predictions, and, of course, odds. While Australia is still doing pretty well, they’re far from securing a spot in the quarter finals.

However, their recent win over Uruguay by 45-10 is a good indicator of possibly making it through. Australia is sitting on #6 in the world rankings, but current points aren’t favourable. Either way, things could go better in the upcoming matches. Current predicted odds are favouring New Zealand, Wales and England. Still, the current rugby betting results are skewed towards the All Blacks. 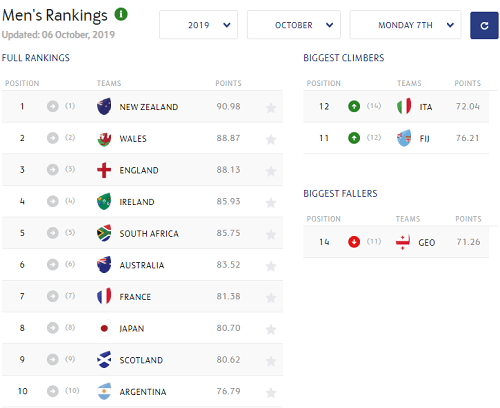 The Wallabies started strong in Saturday’s match with three ties and two conversions, while Uruguay only scored a penalty in the first half. By the time full-time rolled around, Australia had five more tries and three conversions. Despite this, Uruguay managed a try and a conversion shortly before the match ended and Australia reigned victorious. Watch the highlights below.

England’s final score over Argentina was a loud 39-10 by full-time. While Argentina managed to land a penalty, try and conversion by then, England earned five tries and three conversions. Unfortunately, Argentina was down to 14 players after a high tackle from Lavanini. Argentina struggled to keep up, but they tried their best.

Once again, Japan surprised critics with a win over Samoa with 38-19 by full-time. The Brave Blossoms outdid themselves with four penalties, two tries and two conversions. Thanks to their latest win, they’re sitting at #8 in World rankings. Argentina is now at #10, and could fall below it in the upcoming games.

It was a narrow win for the French side against Tonga at 23-21, but they pulled through. Unfortunately, some major errors by Tonga in the first half sealed their fate. While France scored two tries, two conversions and three penalties, Tonga managed only three tries and conversions. Making match highlights are a little hard to watch.