South Africa v Italy was a highly anticipated match for the Friday slot. South Africa won 49-3 against Italy, who had a good track record until this point. Unfortunately, for the Italians, the Springboks were unstoppable on the field and managed to score two tries, two conversions, and a penalty before halftime. Italy only manged one penalty in the same amount of time. When the second half began, South Africa kicked things up a notch with five more tries, two conversions, and a penalty.

Despite some nail-biting moments, Italy couldn’t seem to hang onto the ball for long, even when South Africa fumbled. As such, the latest win has secured South Africa’s spot in the quarter-finals. Moreover, some commenters believe that the predicted “tricky match” turned into a “rout”. By the second half, Italy only had 14 men after Andrea Lovotti was sent off for a tip tackle. 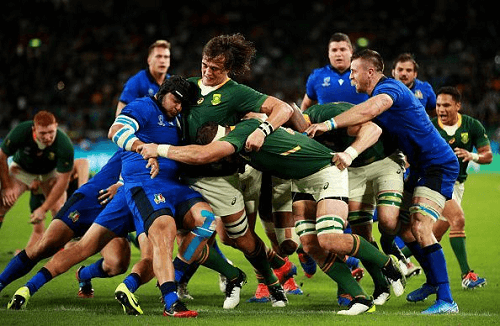 Experts predict that Italy will have to beat New Zealand to stay in the World Cup, but the All Blacks don’t lose lightly. In fact, they have the strongest run and are sitting at the top of the rankings. Their 71-9 win over Namibia has already sent them through to the quarter-finals. Of course, there’s still some time for Italy to miraculously turn things around, but we doubt it.

We could wax lyrical about the All Blacks in another article, but their sound defeat of Namibia is just too painful to rehash. Instead, we’ve included the best highlights of the matches for Aussies to enjoy. In addition, we’ve included some great odds for the upcoming fixtures courtesy of Betway: South Africa v Canada – South Africa Win 1.00, Draw 28.00, Canada Win 28.00.